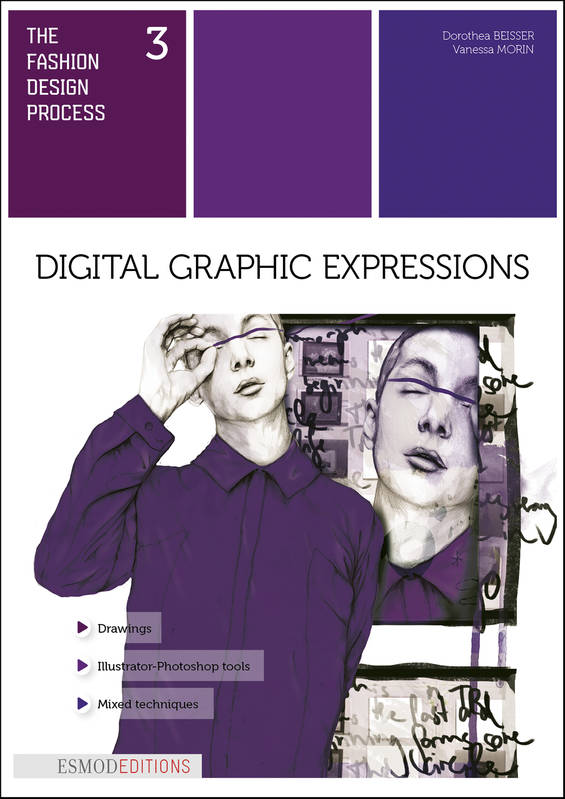 **Fashion drawing on Illustrator and Photoshop;**

With exceptional fashion drawings made by students from ESMOD Munich, this
book is proposed, first and foremost, as a way to awaken each creative
person's curiosity when confronted with the different artistic techniques
proposed by Illustrator and Photoshop to render fashion drawings. These
various means of expression will allow each reader to affirm his personality
and transmit his impulses and creative emotions. The analysis of proportions,
the choice of manual and computer tools, the impact of color and original
layouts are all areas for an illustrator to freely, skillfully associate his
style and messages so it becomes extraordinary and unique. Starting with
sketches based on careful observation, these methods will help motivate you to
realize models and develop your creativity as an expert or amateur. In this
book you will find numerous exercices and paths to bring your ideas to life!

**Dorothea Beisser** , born and raised in Windsbach, Germany, was drawn to
craftsmanship and creative work at a young age. She earned a tailoring
apprenticeship diploma in high school and set off to discover the world at 19.
She then returned to Nuremberg to earn a two-year master craftsman certificate
in fashion and in 1974 took off on a new adventure to Paris, the “Cité de la
Mode”. After studying French, she attended the “Guerre Lavigne” fashion school
(it became the ESMOD International Fashion School) to expand her design and
patternmaking skills. In 1976, she went to Nice to work for the clothing label
“Atmosphere” and returned to Paris in 1979 to work with Frederik Strobel at
his design office (they met during her early years in Paris). She began
working freelance in 1984 and opened her Paris workshop in 1988. Always ready
for new challenges, she returned to Germany to teach at ESMOD International
Fashion School’s new branch in Munich (opened in 1989) and Berlin (1994).
Dorothea Beisser has achieved much during her career and is deeply thankful to
her parents, her sister Eva and especially her sister Christiane, who has
helped her in both words and deeds for the past 25 years.

**Vanessa Morin** describes her work as progressive, mystic and recognizable.
This German-born designer (1985) lived and worked in Paris for a few years
before she started designing under her own name. Before that she had a long
career path – first exploring various artistic and creative fields before
discovering a passion for fashion design.
She studied fashion design and pattern making at the ESMOD International
Fashion School in Munich where she graduated with the “Prix Createur” in 2007.
She also received several other young designer awards in Spain, Beijing,
Berlin and Norway and shortly (to no one’s surprise) joined the high-end,
avant-garde fashion house Damir Doma. In 2012, after five years working with
Doma, she returned to Munich to launch the VANESSAMORIN label that she
describes as “elaborated, progressive fashion for women with confidence,
designed with a devotion to fine elements and precise details”.
In 2013 she began teaching fashion design to final-year students at the Munich
affiliate of her alma mater, ESMOD International Fashion School, and soon
became the school’s artistic director. This book on fashion illustration,
created with Dorothea Beisser, is her way to focus on the beautiful work of
ESMOD Munich students and inspire future fashion students worldwide.
S'identifier pour envoyer des commentaires.